After several long years of war on the border, you have earned the right to buy your mech from the military. Use it to eke out a solitary life doing manual labor on your farm to pay back the loan before your machine is repossessed. All the while, the Enemy from across the border looms, threatening to strike at any moment.

Follow short prompts to relive memories, discover your character and your mech and struggle against the grind of debt. Balance the possibility of combat against your obligations by deleting the subroutines that saved your life during the war but stand in the way of your productivity now.

Will the Enemy attack? Will you be able to defend yourself? How much safety are you willing to sacrifice to make it in your new life?

You will need a 10 sided dice, 9 coins (or anything similar with 2 sides, Othello Chips work well), a sheet of paper, and 30 minutes to an hour.

Mechs Into Plowshares is linear, narrated, and has an ending. Situations will be presented and you are prompted to respond. Your responses are often narrative and emotive rather than tactical, and the prompts are meant to help you tell a story about the character and their machine.

Each page of the game represents a single week in the character’s life, leading up to the week that their loan is due. Each week’s narrative is simple and leaves most of the details up to the player to expand upon or leave alone. The game’s focus is to create tiny scenes that you can engage in as much as you’d like. Never feel like you have to move on from an idea that interests you. Feel free to think, write or draw as much as you want! Future prompts are unlikely to invalidate the canons you create in this way.

There are only  few mechnical decisions you will make throughout play, and they all relate to your Mech’s combat subroutines and your choice to either keep them or erase them. By deleting combat subroutines you decrease your chances of survival if combat occurs, but in order to make payments on your loan you’ll be forced to erase some. This is the primary mechanical conflict you’ll be facing as a player.

The Subroutine Chart is both a mechanical tool that lets you know what happens and also a way for you to establish your mecha’s history and personality. It will determine if you survive combat, if you can make a payment this week, and for a few other prompts. To use it, roll a 10 sided dice (1d10) and refer to the spaces adjacent to the number you rolled to see which routine is activated. When your character erases a subroutine, draw a line through it to cross it out.

The Chaplain’s Game is a divination technique that will determine if you have to go into combat at various points in the game. It’s an in-character action that you will mirror in the real world using coins you have used throughout the course of play. There is a full description of the Chaplain’s game and how to play it, along with visual aids, on its own page at the back of the book and in its own PDF with the game’s bundle. It is a good idea to read these instructions before you start playing the game, but try to avoid spoilers if you choose to use the one in the back of the book.

Read the game in order, and try not to get ahead. Plain text tells the story. Bold text gives prompts. Write down information you need to remember. 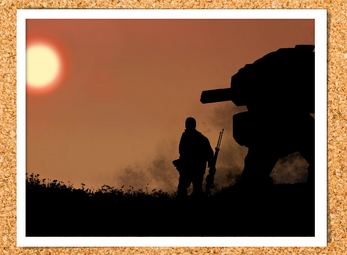